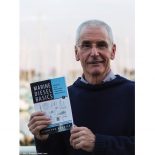 Here’s the trailer made ahead of the documentary “Willard, Hermit of Gully Lake”  who jumped a troop train in Nova Scotia, Canada, rather than go to war in 1942 and who subsequently took up residence in the woods.

Willard, who was born in Massachusetts in 1916,  died in 2004, after living 60 years in the wilderness.  Only a year before his death, his makeshift hut and all of the belongings  — including books, his various writings, a homemade guitar, and a rifle — were destroyed in a forest fire. With reluctance, Willard subsequently moved into a cabin built for him by Colchester County using aggregated pension funds.

In 2003, after some of his friends went to get medical help against his will, Kitchener fled back to the woods, apparently to evade treatment or placement in a retirement home. His remains were found on June 27, 2004, by a search party of over 100 volunteers.

A strange and remarkable man. Though few of us might envy him, the way he lived his life at least show all of us that choices are possible; that working for a corporation all our lives, buying a property to fill it with stuff is only one choice among.

Watch the video:  Trailer before the main documentary was made

This entry was posted on December 29, 2009 by Dennison in Hermits, Hermits & Solitude and tagged Canada, eremitism, hermits, videos.